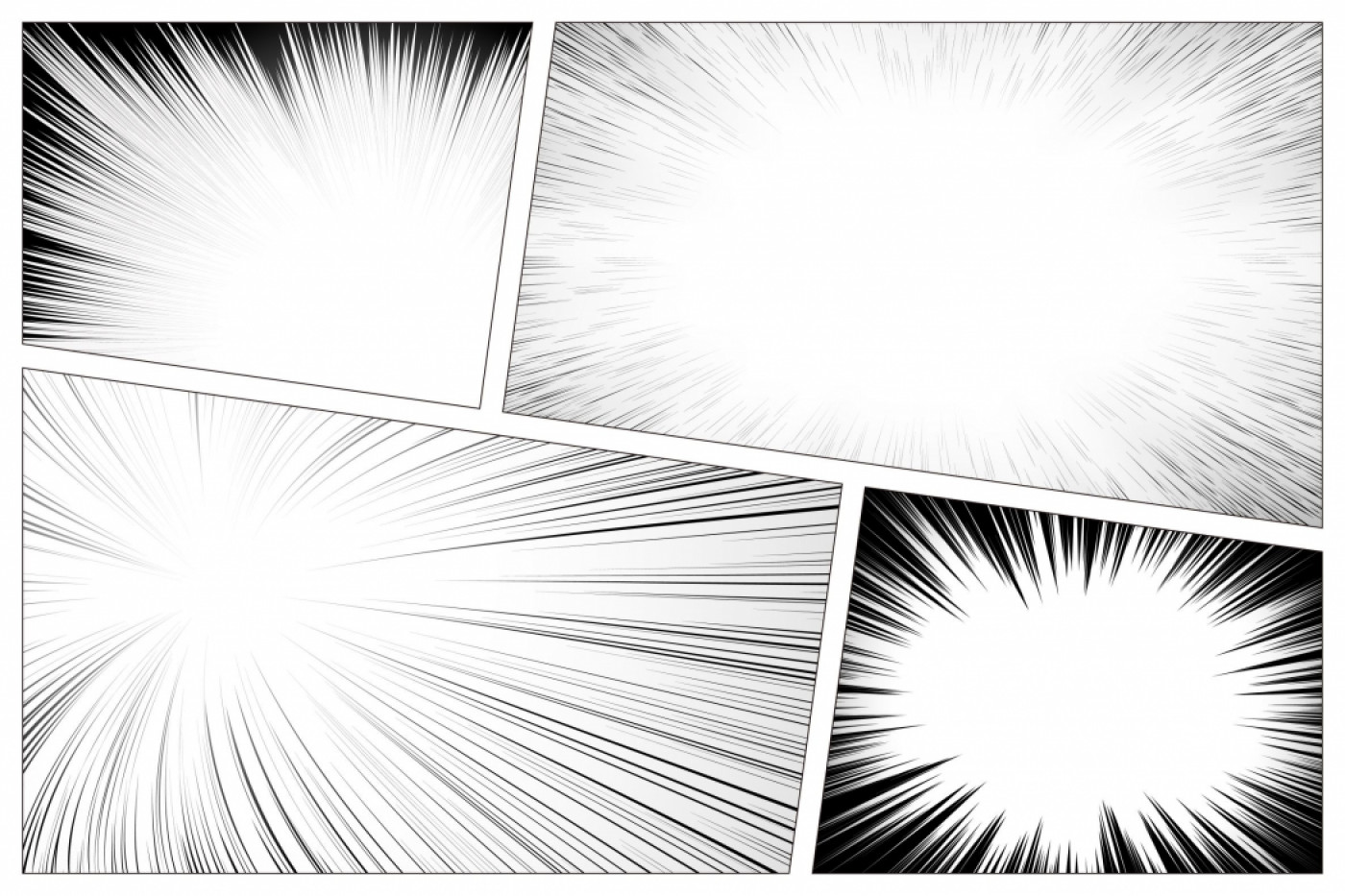 What is manga? Learn the Basics of Japanese Comics

A comprehensive look at what manga is. Recommended for anime and manga fans alike as well as those new to manga. Discover the origins of manga as well as what makes manga manga. Uncover the differences between manga and other foreign comics, and the different platforms you can find manga. We included lots of example titles as well as a list of 10 must-reads to help you find something to read.

Manga refers to comics originating from Japan or Japanese comics that have a distinguishable “manga-style” that differs from American comics.

More on the characteristics of manga below, let’s first dive into the history of manga.

The roots of Japanese manga is said to be a picture scrolls from the Heian Period called Choujuu Jinbutsu Giga (鳥獣人物戯画 - “Animal and Human Caricatures” or “Frolicking Animals”). In Choujuu-Giga, anthropomorphic animals are drawn with dynamic lines, evoking mythical and fantasy elements that are still present in modern day manga. 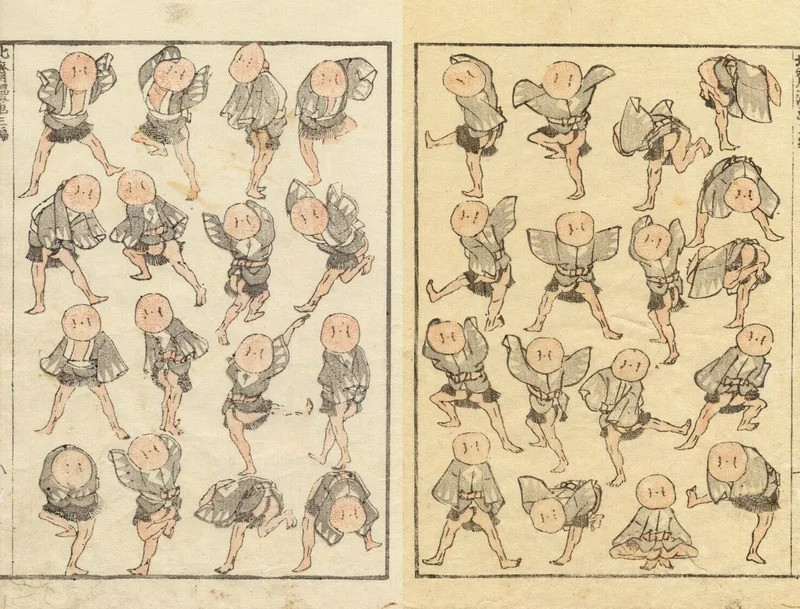 During the Edo Period, the works of Hokusai Manga (北斎漫画) by famous ukiyo-e artist Katsushika Hokusai (葛飾 北斎) became famous. The Hokusai Manga is a collection of sketches that humorously depicts landscapes, plants, and yokai amongst others. 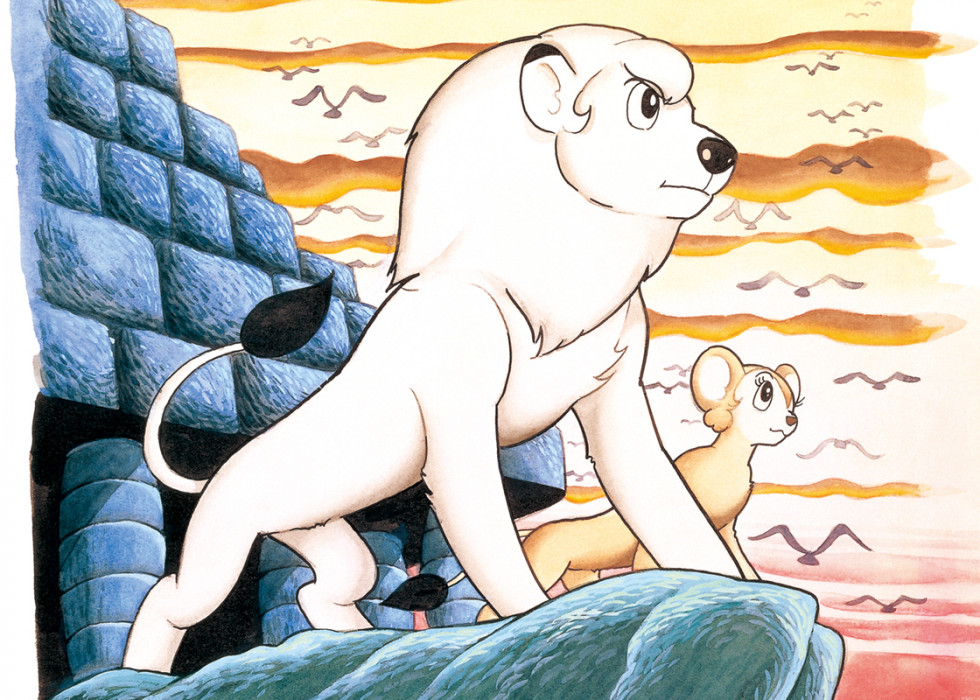 Entering the Showa era, Tezuka Osamu (手塚 治虫) renowned and remembered as the Father of Manga released works such as Astro Boy and Kimba the White Lion. Tezuka Osamu’s creations filled with grand ambitions and dreams touched the hearts of his many readers. His influence in the anime and manga industry has been passed down through generations to this day.

Read about Tezuka Osamu’s contributions to the anime industry here.

You know what manga is - Japanese comics in a style different from American comics - but what makes manga manga? In this part, we’ll explore the characteristics of manga, the key differences between American comics and Japanese manga, as well as how to read manga. 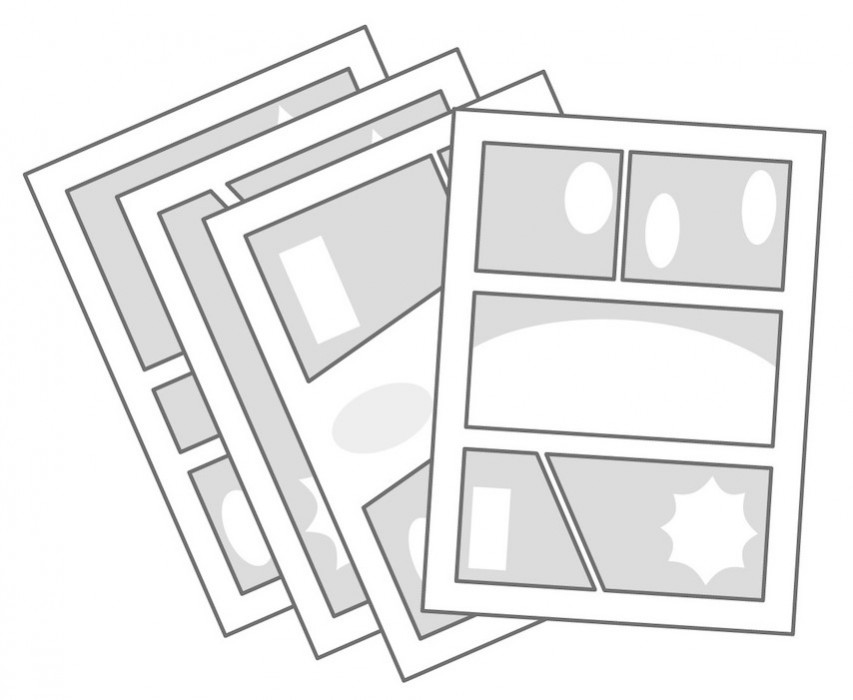 Japanese manga has its own unique characteristics that make it stand out from other forms of comics. Here are the general characteristics and features when it comes to manga:

The above are general characteristics. As manga are expressions of art in essence, there are manga artists with unique drawing styles that don’t fit these norms.

How to read manga?

All Japanese books have right side binding and are read from right to left. This also applies to manga and magazines. 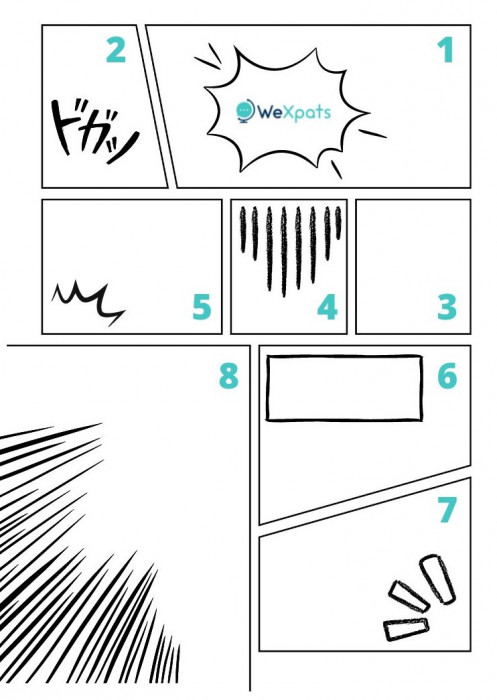 Manga and Other Comic Differences 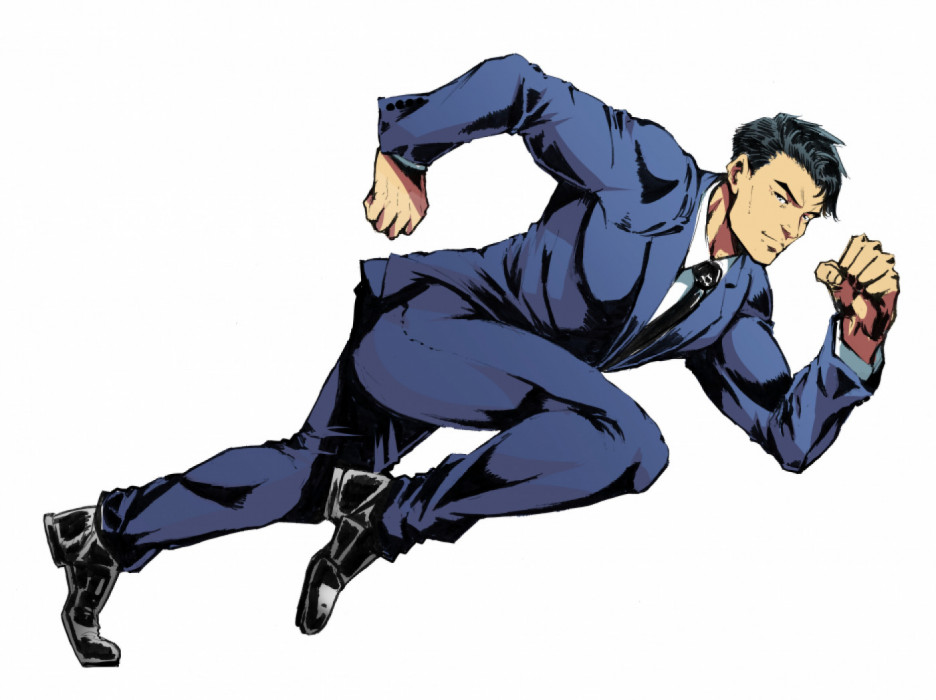 In addition, graphics in American comics are highly definitive with almost photograph-like quality which they use to relay the story’s plot. On the other hand, manga expresses character’s movements and emotions through writing, a huge contrast with American comics.

Last but not least, American comics are created by a team of professionals each with their own dedicated roles. In Japan however, manga are created primarily by manga artists with help from assistant(s). 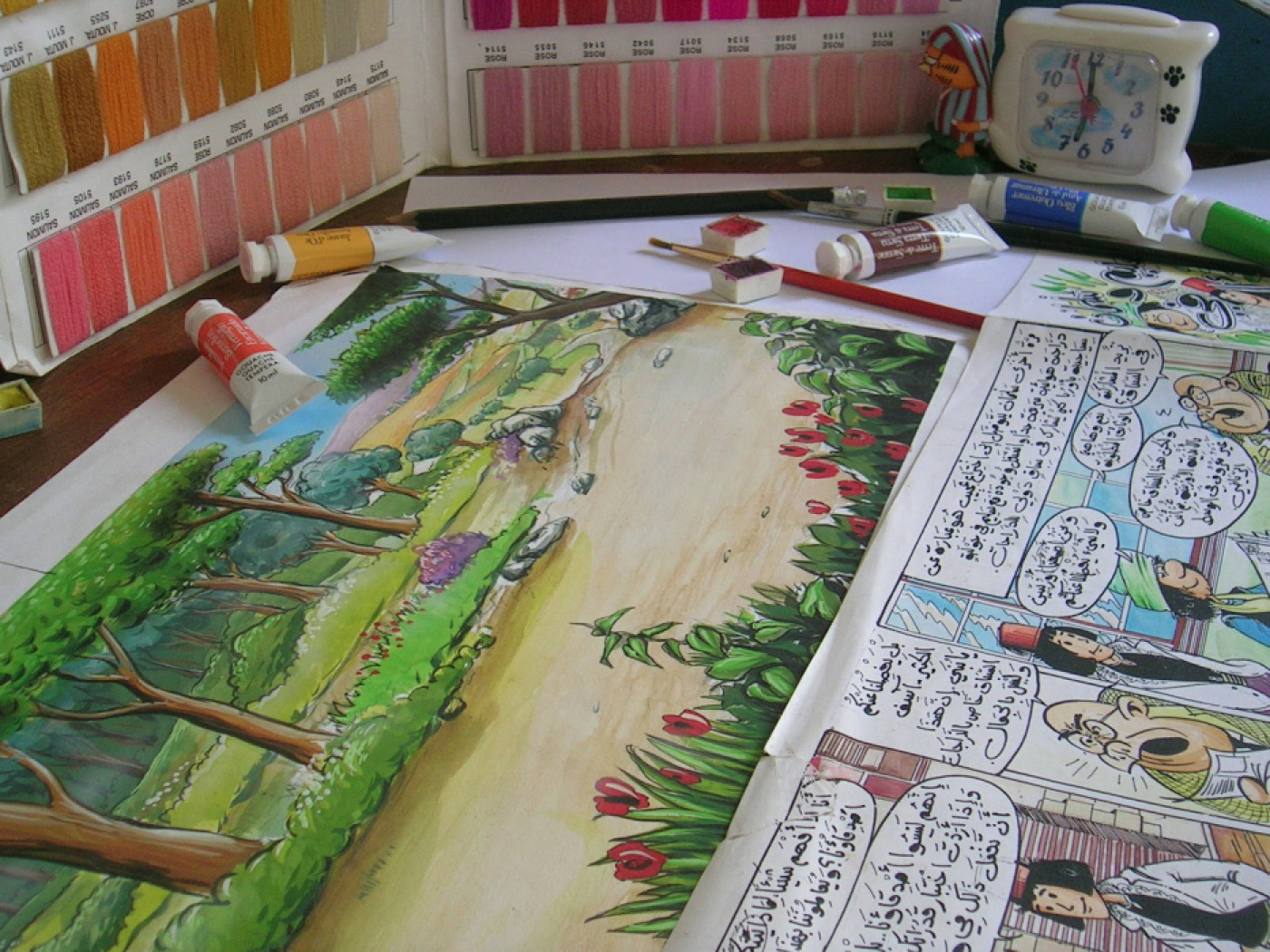 Depending on the work, it may be gouache or water-coloured. Just like Japanese manga, genres and themes covered in bandes dessinées are diverse, even covering essays, entertainment and gag humour.

Although the number of full coloured works in Japanese manga have increased, colourful bandes dessinée appeal to those who enjoy the vibrancy of the pictures. Although the origins are French and Belgium, famous works have been translated to languages around the world, including Japanese. 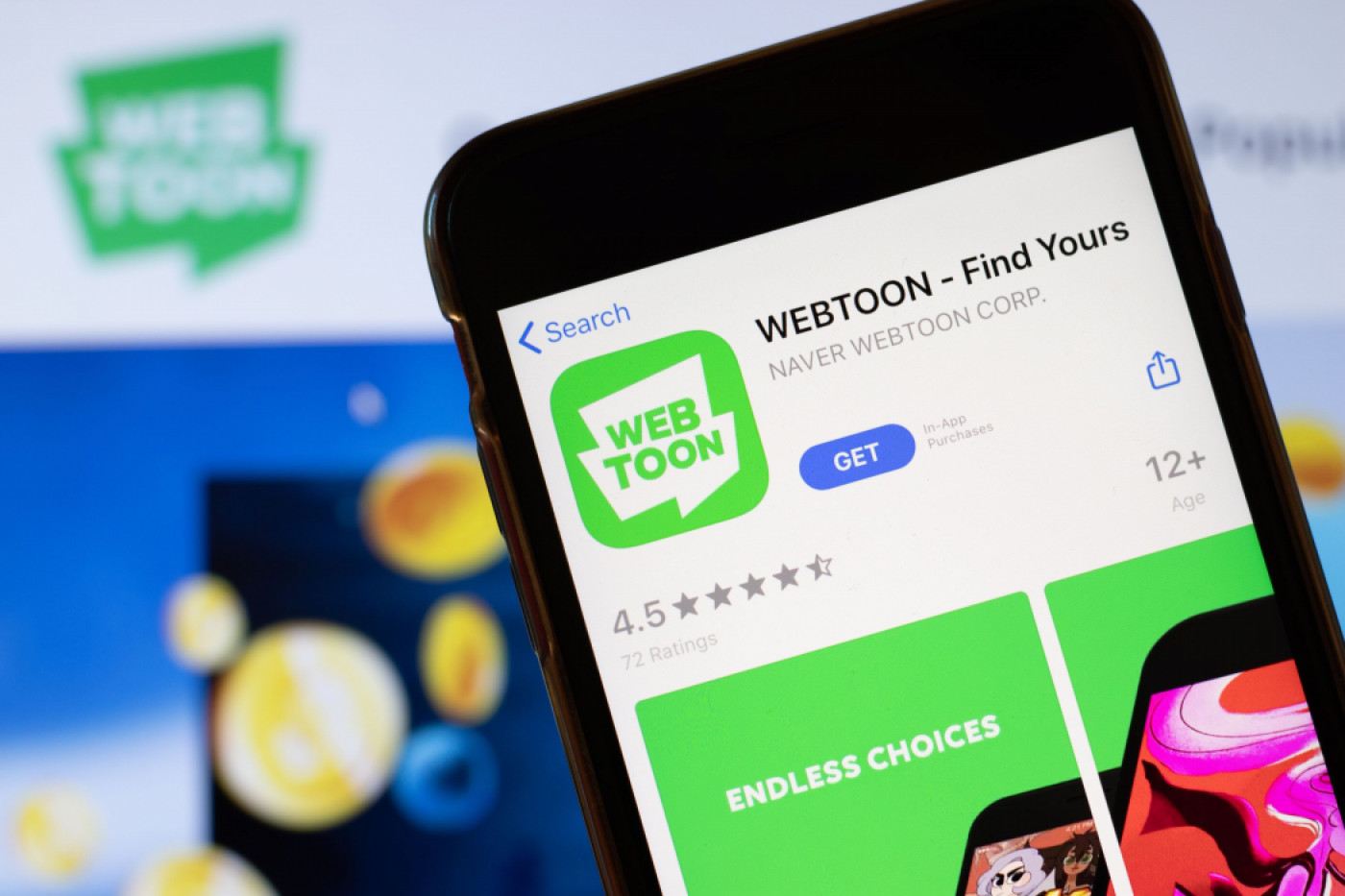 Webtoon is the name of a digital comic that originated from South Korea. Manga are usually in paperback format but in recent years with the rise of technology and smartphone usage becoming commonplace, digital publications have increased.

Webtoon is a long vertical strip manga that takes advantage of smartphones with easy vertical scrolling to advance through pages. Frame divisions and placements are also very different from manga as technically a chapter comprises only 1 single long page.

Last but not least, webtoons are in full colour just like bandes dessinées. In recent years, Webtoons has gained popularity outside of Korea and it seems to be becoming popular as a new form of comic. There are many anime and drama adaptations of Webtoons.

Did you know that manga comes in different forms? 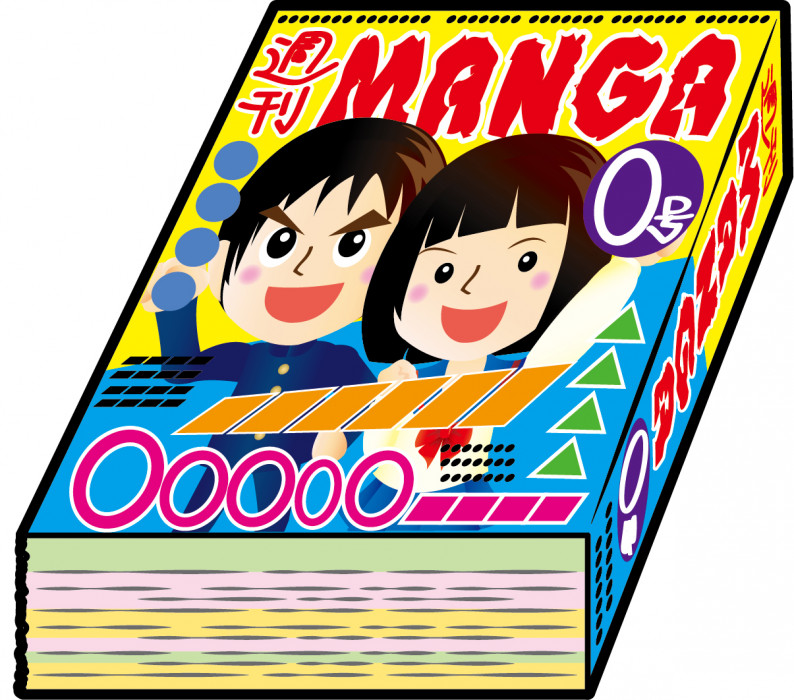 In Japan, manga chapters are initially released in super thick manga magazines. Frequency of releases are usually monthly and weekly but there are also biweekly, bimonthly and irregular releases. You’ll need to know the name of the publishing magazine to find out when and how often they release. 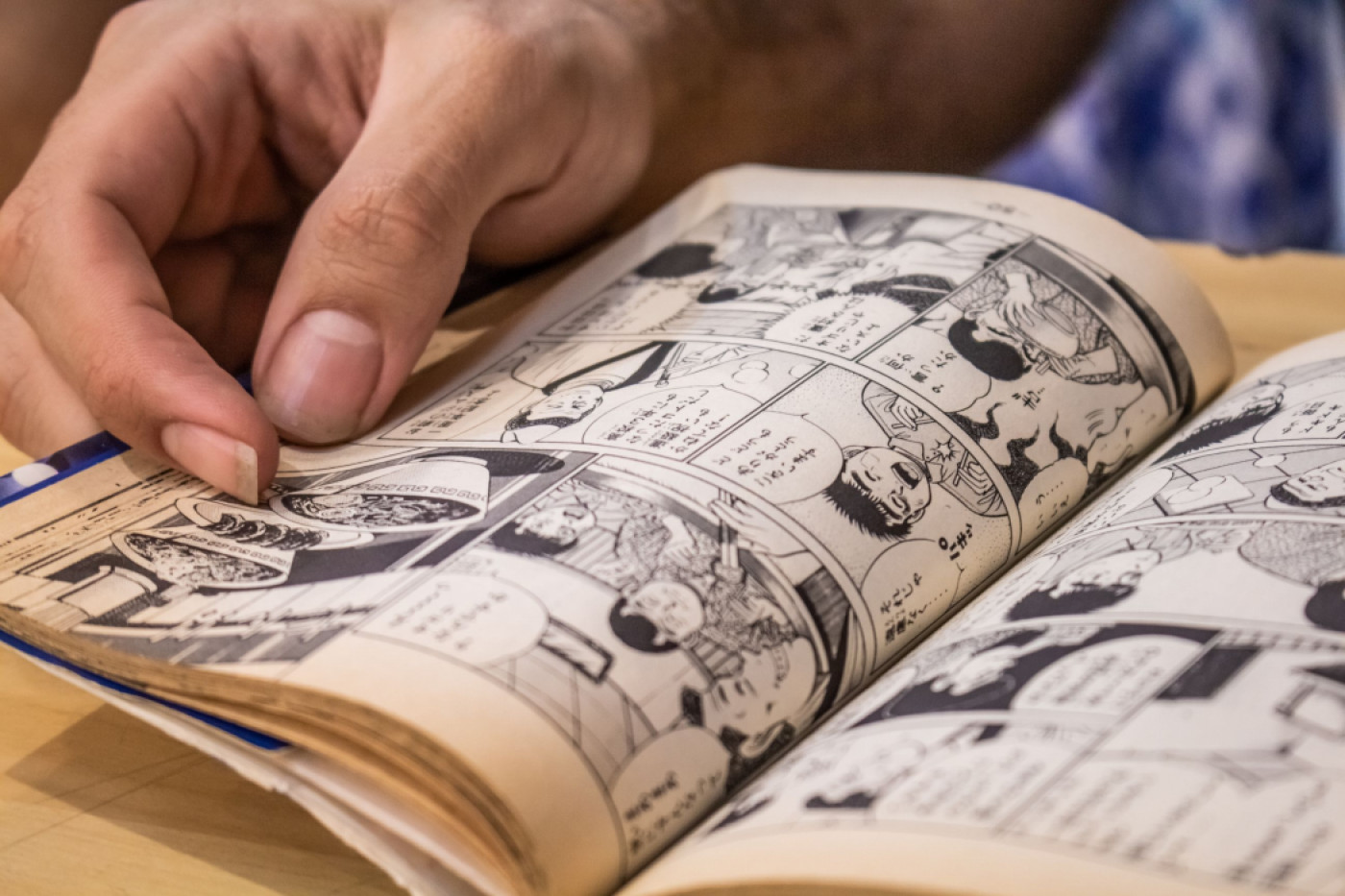 Outside Japan, the most prevalent form of manga is in book form or「単行本 tankoubon」as it is called in Japanese. Tankoubon are compilations of manga chapters that were previously published in manga magazines. Many Japanese manga readers read manga magazines then buy manga for the series they love as a collection and also to support the manga artist.

Tankoubon can be a standalone book (no manga series) or an individual volume as part of a manga series. For example:

With the growing usage of smartphones and computers, more and more manga have become available in digital format. Distribution methods include eBooks, manga apps, and websites. Payment systems include subscription services for unlimited reading throughout the subscription period or buying only those you want to read.

Compared to physical books, digital manga take up no physical space whatsoever which is great for a country like Japan where storage space can be very limited. Also, a single device can hold 10s to 100s of manga series making it easy to bring all your manga with you and read it on the go.

WebManga is the Japanese version of WebToons. They are manga created for online distribution and do not go through the traditional distribution method of manga magazines, instead published for the first time online. Popular WebManga series do end up receiving Tankoubon adaptations though. WebManga are not necessarily fully coloured like WebToons.

Some WebManga publishing sites include:

Doujinshi are self-published works that can be magazines, novels, or manga created by fans. Also called doujin for short, doujinshi can be created by an independent artist or a doujinshi circle composed of like-minded fans working together to create a piece of work.

Doujinshi are based on original works, using existing characters to path an alternate storyline, what could have happened, advance canon/non-canon romantic relationships, or to shape imaginative behind the scenes stories between characters.

Although doujinshi works are primarily sexual in nature as original source material does not depict these situations as it is generally considered inappropriate for the target audience, this is not always the case. There are definitely wholesome sweet doujinshi stories available as well. After all, doujinshi is the result of fans’ creative imaginations and love for a series so anything can appear in doujinshi, just like fanfiction.

Though rare, there are manga artists that draw doujinshi for their own works.

How to Find Manga -  By Demographics, Genre, Artist Publishers

The best way to find manga is by demographics, genre, author, and publishing companies. Let’s have a look at demographics and genre first.

Manga demographics are categorized the same as it is for anime, which is not surprising considering most anime works are adaptations of manga. You can read about the 5 main types of manga/anime demographics in our anime article: Anime Search, Finding Anime by Year, Genre, and Demographic 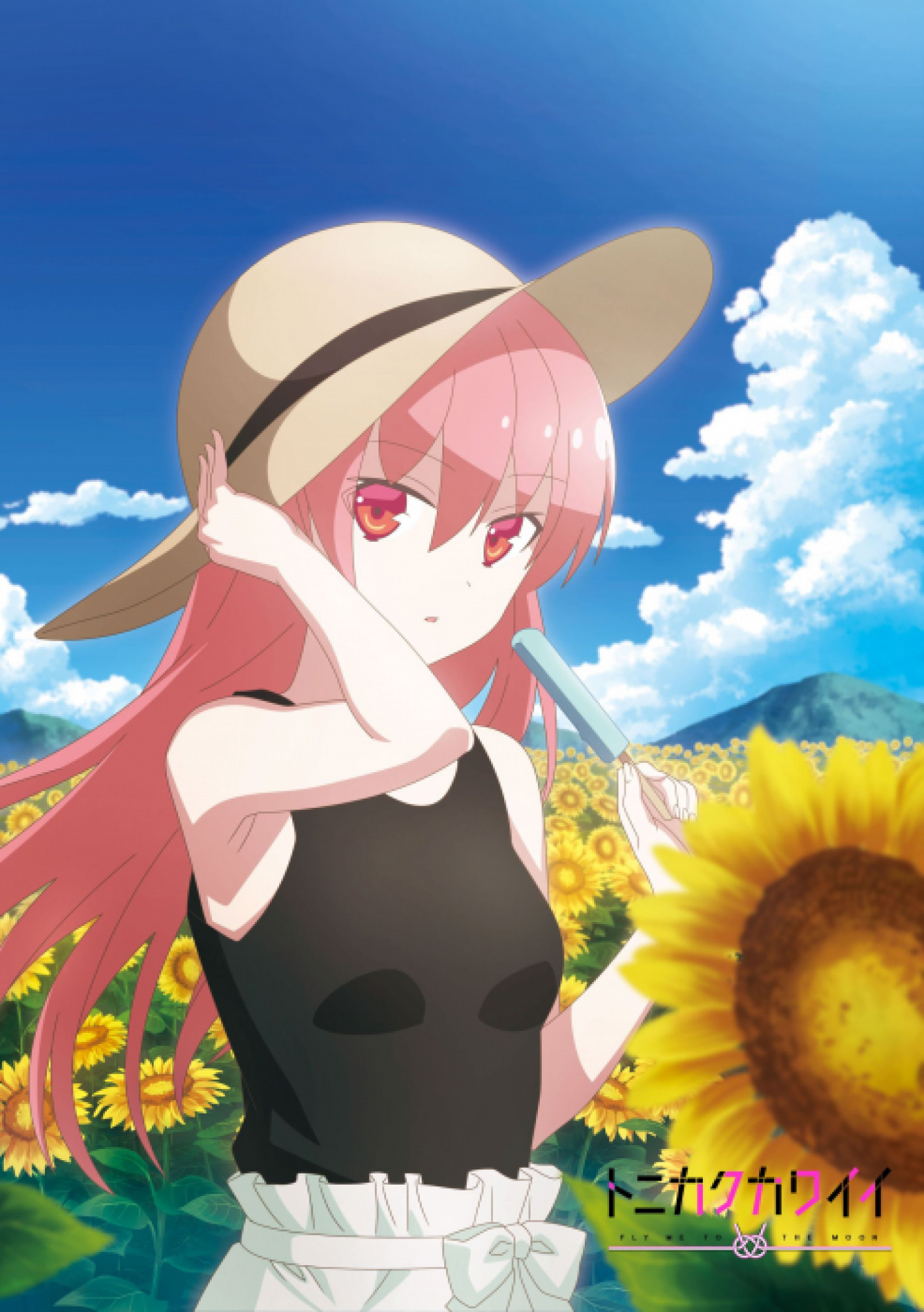 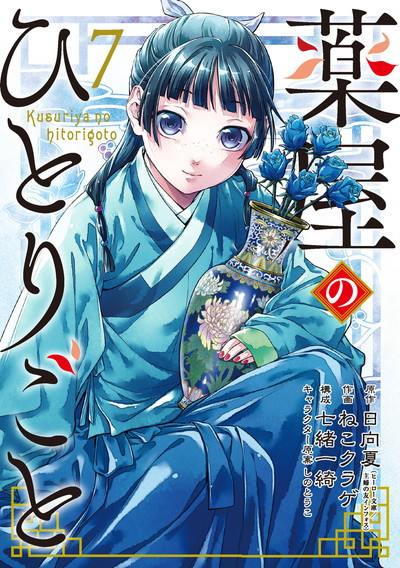 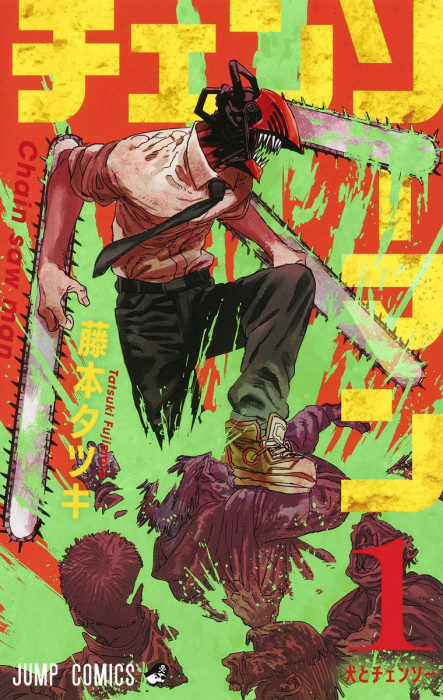 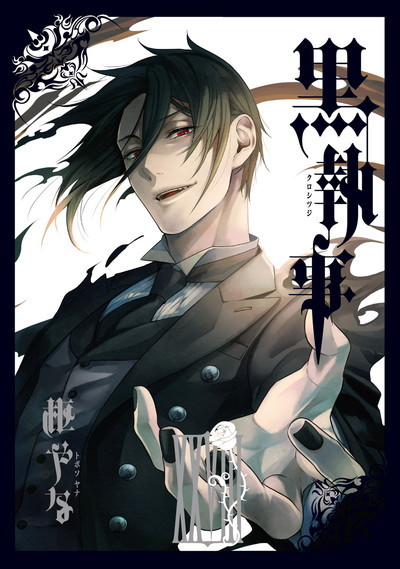 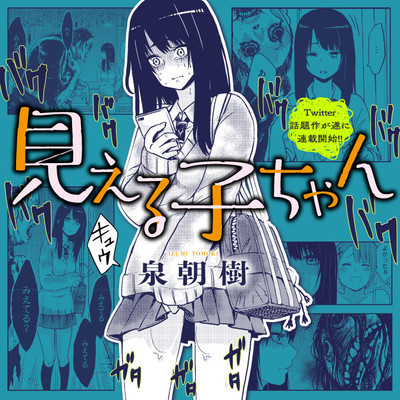 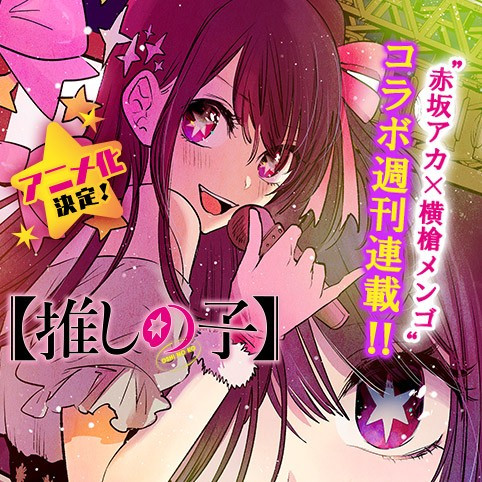 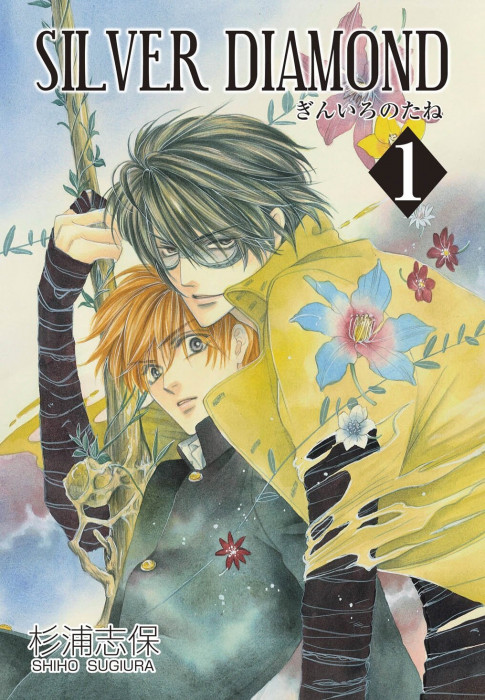 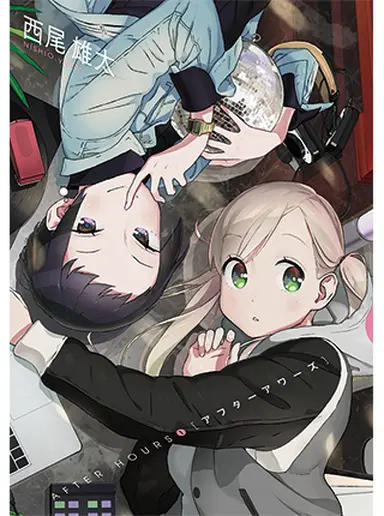 After finishing a great manga series, how do you find the next best piece of work to enjoy? One of the best ways to discover new manga is looking up the manga artist's other works. You may be surprised at what you find; perhaps a famous manga you’ve heard of was actually written by that artist too, or a hidden gem that didn’t hit any top manga charts but still great, or you might be out of luck and the manga artist only had a one hit wonder.

Here are some manga artists that are renowned for multiple manga works:

Takahashi Rumiko is one of the most successful manga artists in the industry. Most of her works are targeted at female readers as shoujo manga with elements of romance, comedy and fantasy. Urusei Yatsura and Ranma 1/2 in particular were influential works that shaped future generations of shoujo manga.

Togashi Yoshihiro’s greatest works, Yu Yu Hakuso and Hunter x Hunter, are 2 of the best-selling manga. Both works have similar themes involving action fighting and fantasy superpower elements with a focus on strong friendship between characters.

CLAMP is an all female manga artist group, a rarity in Japan where manga artists do not usually form groups, preferring to publish works solo. Perhaps due to having several members, they cover a wide range of genres including fantasy, magical girls, romance, supernatural, and even mecha.

Unique to CLAMP’s works is the aspect of soulmates and alternate realities with crossover of characters into other series’. This is especially apparent in Tsubasa Chronicles and xxxHOLiC whose stories are closely related, and to a certain extent Cardcaptor Sakura. Spotting Easter eggs in each manga series is part of the fun that comes with reading all of CLAMP’s works. This applies to anime adaptations as well.

Searching through publishing companies is an alternative way to find new manga to read, especially if you are looking for English-translated manga. Though there has been a great increase in manga available in English, there are still plenty of manga that have not received foreign language adaptations. This is not necessarily a bad thing as that means foreign-language adapted ones can be said to be the cream of the crop.

With the limited number of English manga publishers, it is not so difficult a process to browse through the available manga titles looking for something good to read. 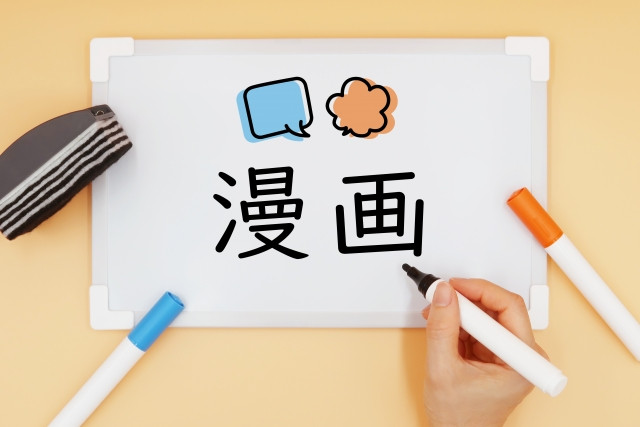 To finish this article, here’s a list of 10 manga titles to get you started on your manga reading journey! 5 for shounen and 5 for shoujo. 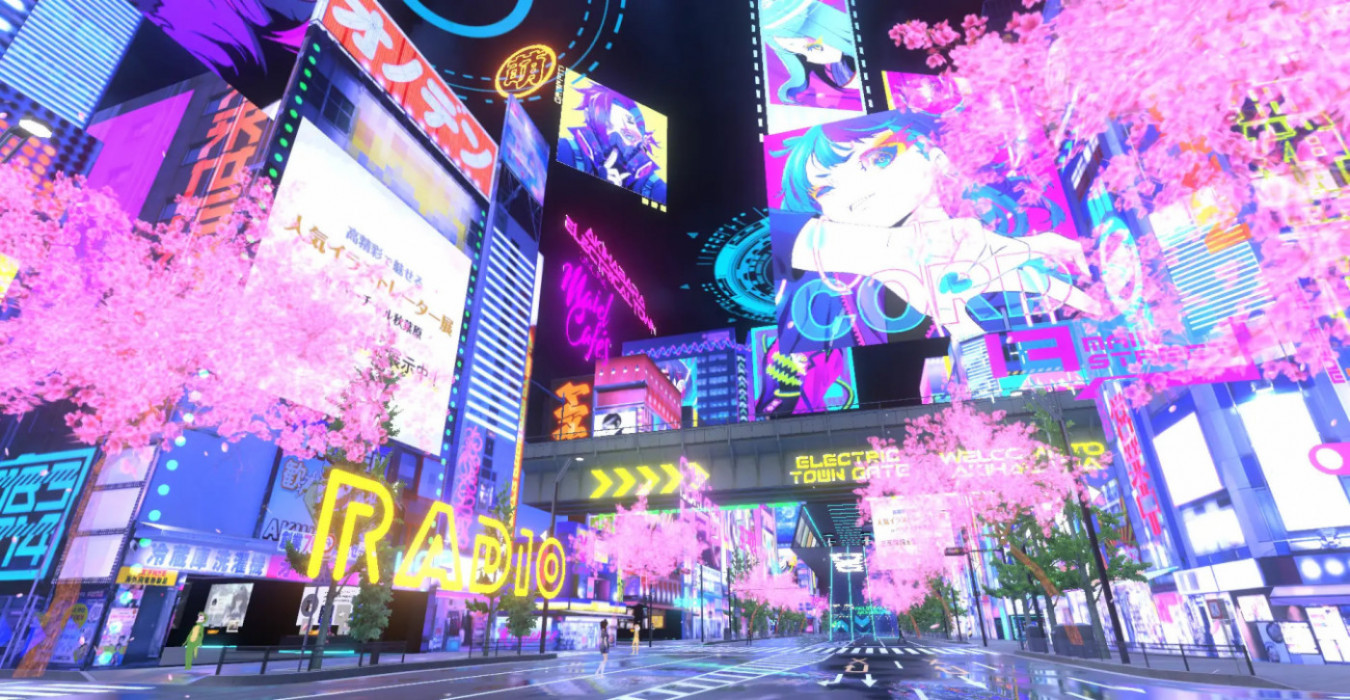 Japan may be famous for its traditional culture but its modern culture is just as popular. In this article, we explore what Japanese pop culture includes. Not just common ones frequently featured in s... 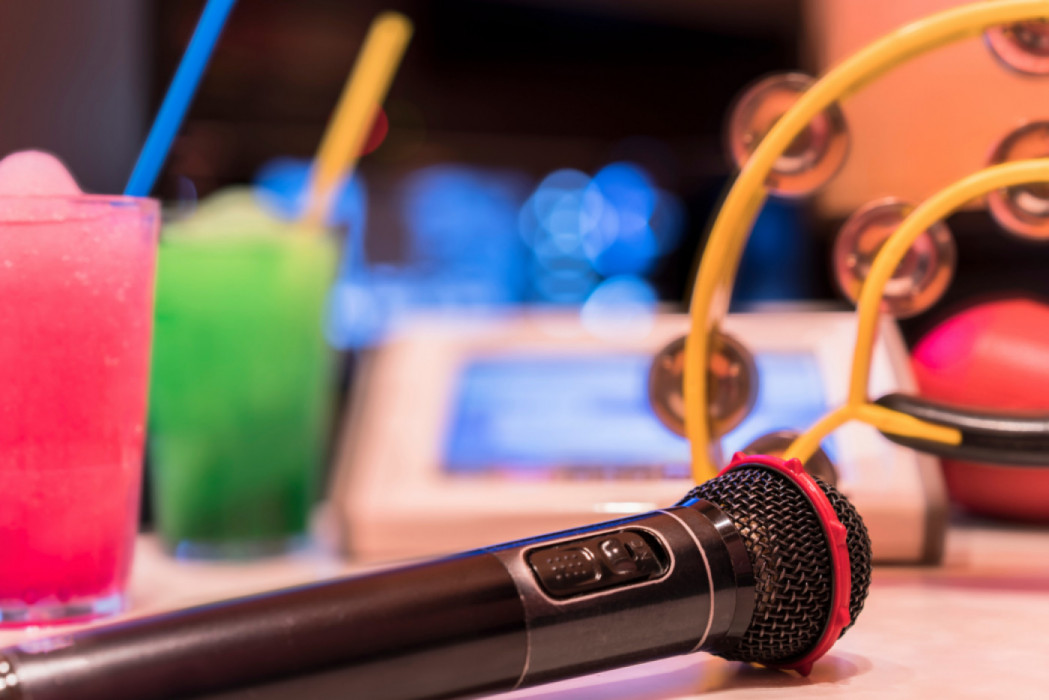 8 Reasons to Check Out Karaoke in Japan

Karaoke is one of the many fun activities you can try while visiting or living in Japan. There's a whole culture around karaoke in Japan. And there're ways to enjoy karaoke even if y...

Anisong, The Key to Beautiful Anime: 10 Anime Songs You Should Know & 10 Anime About Music

High quality music is one of the qualities that characterises anime. Anime songs include not just opening and ending songs, there’s also soundtrack and more which we will cover in this article. ... 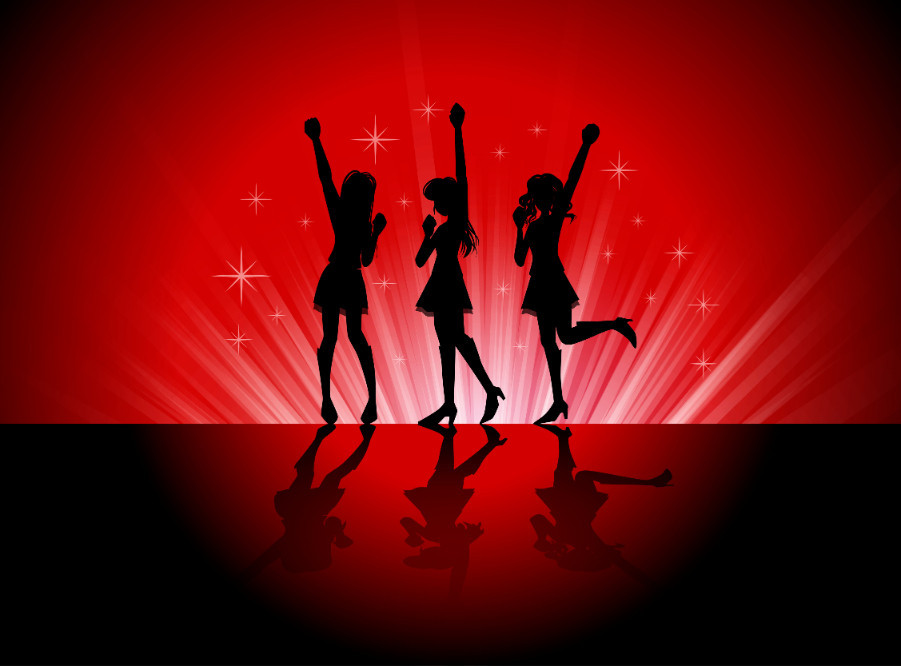 Japanese Idols, The J-idol Culture, and Who You Should Know

K-pop idols have become a global phenomenon, but how about Japanese idols who have been around for just as long if not longer? We take a look at J-idols, what the idol and fandom culture is like, as w... 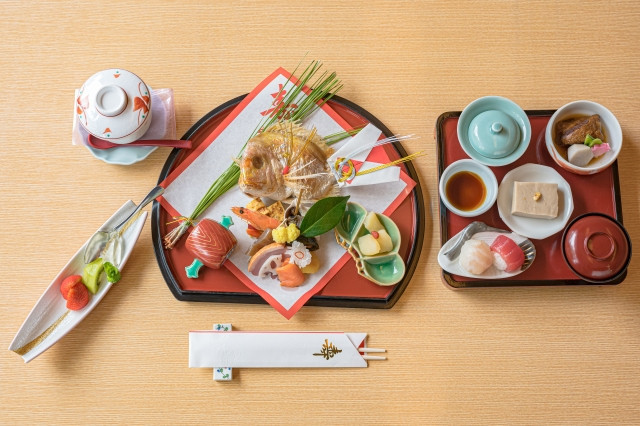 Washoku is traditional Japanese food, a crucial part of Japanese culture. In this article, we explain the characteristics of washoku and introduce several classic washoku dishes. Every meal should end...