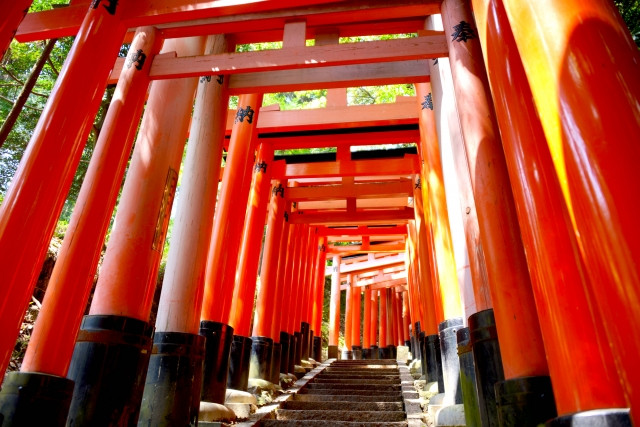 Walking down one Thousand Torii for Prosperity: a guide of Fushimi Inari Taisha

Going through travel guides of Kyoto, you’ve probably seen the thousand red gates and perhaps even have taken pictures; however, there’s so much more to explore at Fushimi Inari Taisha along with its rich history and seasonal events. Let us show you the true beauty of Fushimi Inari Taisha.

The Oldest Landmark in Kyoto

While the Senbon Torii is one of the most famous tourist attractions in Kyoto known by the world, only a few would recognize the full significance of Fushimi Inari Taisha.

The History of Fushimi Inari Taisha

Fushimi Inari Taisha worships the god of rice, sake, and success and also the deity of business Inari as the head shrine for Inari shrines throughout Japan. It was first founded in 711 in Inariyama in South Kyoto by the Hata family which was a local powerful family; however, it was later moved to the current location in 816.

The shrine structure we see now was built in 1499 after the war during the Onin period based on Azuchi-Momoyama characteristics. Before the restoration of the shrine, it was raised to the highest rank for Shinto shrines in 942 as an object of imperial patronage from 794-1185. In 1871, it was entitled as one of the Kanpei-Taisha which had the meaning of the first rank of government-sponsored shrines, but the ranking was repealed in 1946. 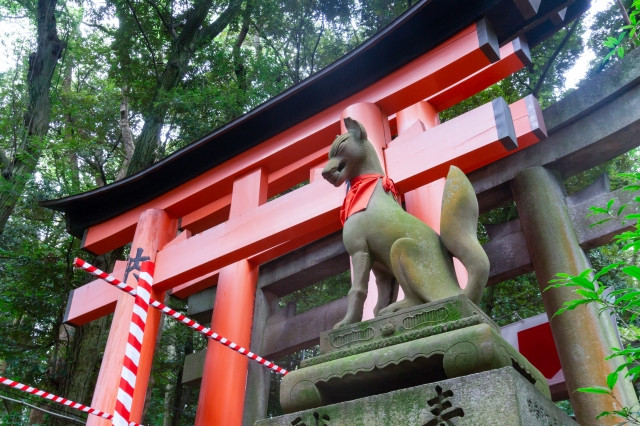 As mentioned in most articles regarding Fushimi Inari Taisha, visitors can see statues of foxes around the shrine.

Foxes, "Kitsune" in Japanese, are considered messengers of the Inari, a deity that can be wished for a rich harvest, successful business, and stability of a family. Being the messengers of the gods, each fox statue carries different objects in their mouths or beneath their front paws that have distinct meanings such as the key of a rice granary (or god's treasure), the spirits of the decedents as jewels, a scroll to represent the belief of god, and an ear of rice to wish for abounding harvest. You can also see other fox statues throughout other shrines in Japan. 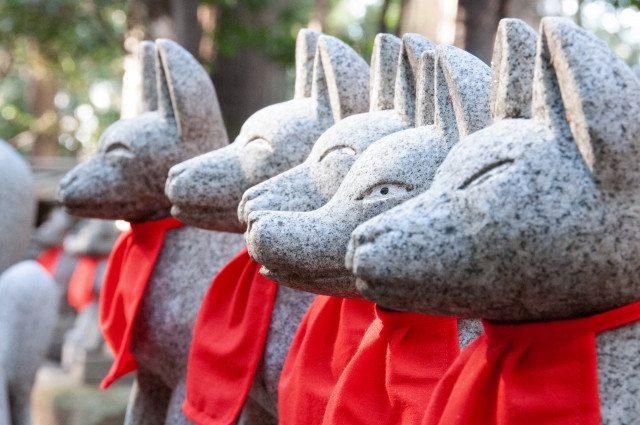 Kitsune (Foxes) are mostly depicted as highly intelligent and long-living; to be more specific, white foxes are the ones that represent the Inari god and are different from other foxes in Japanese culture. They are protectors against demonic spirits. Contrariwise, foxes also represent trickiness, slyness, and the nature of being mischievous in many stories from Japanese folklore where they fool homeowners in the shape of beautiful women to steal food and possessions.

There are various souvenirs you can choose from at Fushimi Inari and you cannot miss the Foxes! The fox-shaped souvenirs can be ranged from 500 yen to 5000 yen as straps and figurines. The white color of the foxes is meant to represent the divine animal being transparent and cannot be seen normally by commoners.

Walking through the whole mountain trails at Fushimi Inari Shrine takes approximately two hours with stops for tea or snacks.

The Romon and the Main Shrine 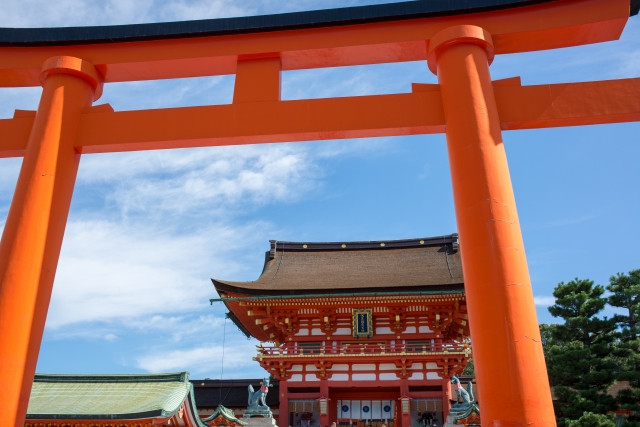 The Romon is the first stop after the Temizu (washing hands with water before entering the shrine) with its signature bright red/orange color. It’s famous for not only being the largest tower gate in Japan but was also built in 1589 by Toyotomi Hideyoshi who was a Japanese shogun and politician during the Age of the Warring States known for his rise from a peasant background. After entering, you will see the main shrine where you pray and offer prayer money (Saisen). 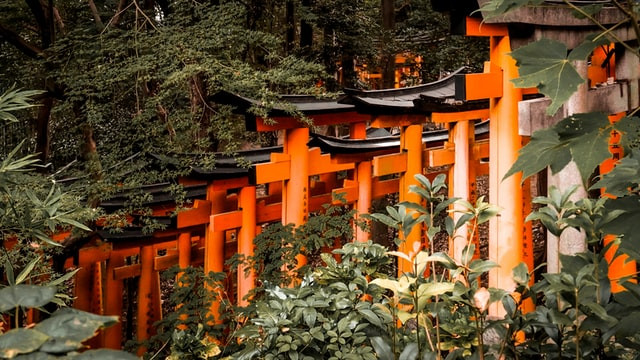 The Senbon Torii is probably what most people would think of when mentioning Fushimi Inari Taisha or even Kyoto. The attraction itself has become a representation of Japan. The path of a thousand torii gates are gates donated by people or companies for wishes to be granted; the names of the donors are painted on the gates. You can try to find some famous business or celebrity names on it!

At the end of the gates, you will reach the inner shrine related to the main shrine. Here is also where you can buy some unusual ema shaped like the face of a white fox. Keep climbing up to the top of the mountain where it hits 233 meters, and you will be able to see various sub-shrines for awareness, health, and business. We also recommend climbing because there are far less people as you head to the top. Tourists tend to congregate at the bottom, get their pictures, and miss all of the amazing things past the first row of gates.

You should not miss the two festivals at Fushimi Inari Taisha; they are the Great Hatsu-uma Festival in February and Motomiya Festival in July.

The Motomiya Festival is famous for hanging up lanterns around the shrine lit up at night. Many visitors visit the shrine for the dreamy atmosphere and for the followers of the Inari god, it is the time of the year to offer their appreciation to Inari for the wellbeing of everyday lives.

On the other hand, the Great Hatsu-uma Festival is held in February in contrast  with the Motomiya Festival in the summer. The festival is held all over Japan at Inari shrines on the first Uma day in February to pray for the prosperity of business, the safety of families, traffic safety, and all kinds of success.

The shrine can be entered at any time, and the shrine office is open from 8:30 am ~4:30 pm. Admission is free at all times. 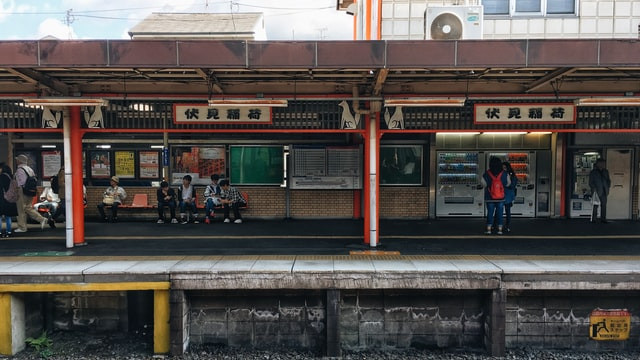 A 30-minute train ride from Osaka Station with Tokaido-Sanyo Line Special Rapid and get off at Kyoto Station to transfer to JR Nara Line to stop at Inari Station.

With this guide, we hope that you can enjoy your time at Fushimi Inari Taisha not only for the "instagramable" Senbon Torii but also for a deeper understanding of the shrine itself. Next time, when you see foxes statues at other shrines, don't forget to let your friends know that these are no ordinary foxes but messengers of the Inari god! 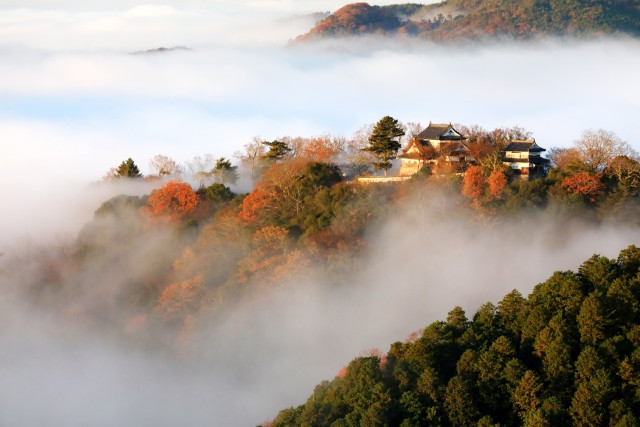 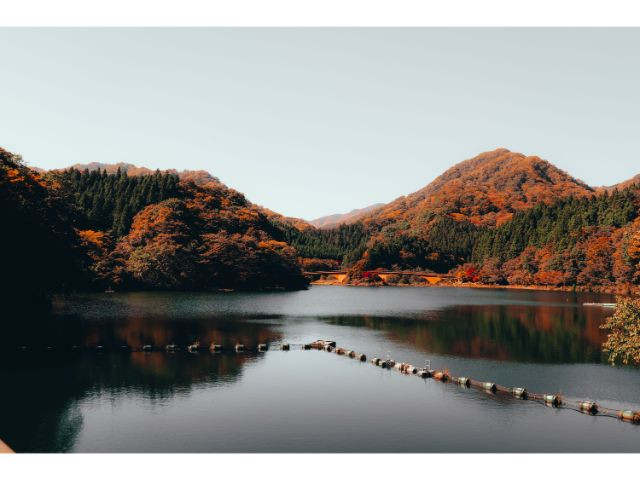 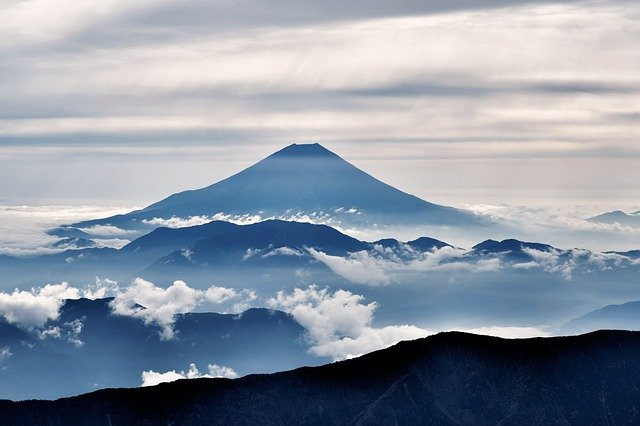 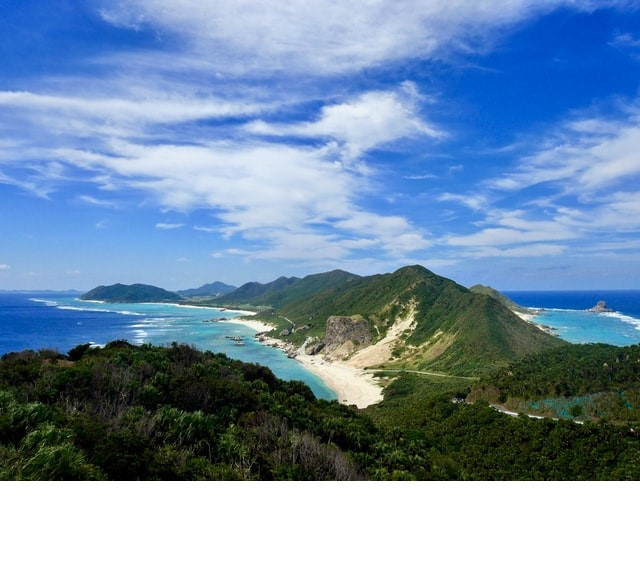 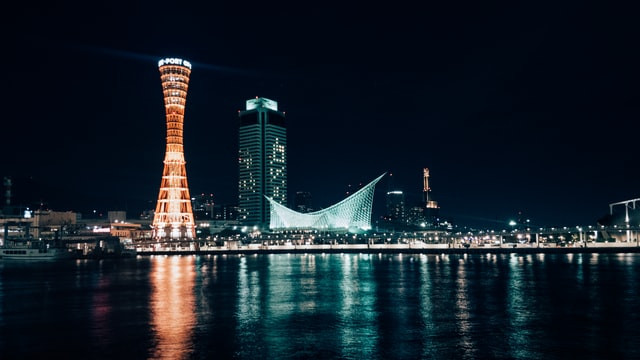