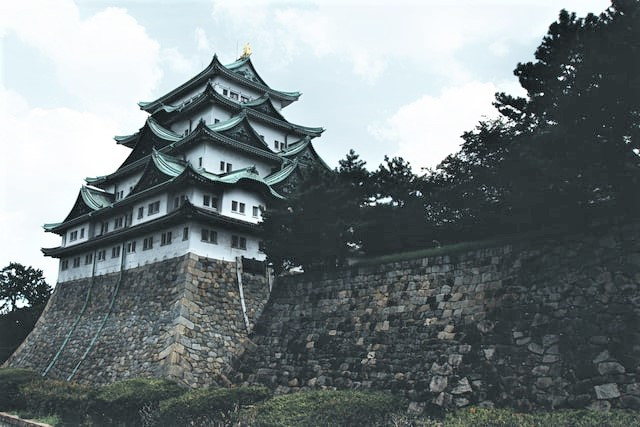 Visit Nagoya’s most famous icon, the golden castle that is Nagoya Castle. Learn the castle’s history, walk through the castle’s interior and admire its architecture, and finally marvel at the castle’s REAL gold roof ornaments - the Shachihoko. A trip to Nagoya will not be complete without seeing this historic landmark.

All About Nagoya Castle

Nagoya is the capital city of Aichi Prefecture, located to the west of Tokyo. Nagoya is rich in culture and considered one of the most industrially advanced cities in Japan. The city's pride and joy and the greatest historical landmark is Nagoya Castle.

Nagoya Castle was first built in 1610 to 1612 during the Edo period upon instruction by the Tokugawa Shogun. Its primary purpose was to be a defense fortress to ward off against potential attackers and to preserve the peace of its surrounding area. Unfortunately, most of the castle was destroyed by air raids during World War II. Fortunately, a number of the castle’s artifacts that were hidden away survived the ordeal and are now displayed at the castle as part of its history exhibition. 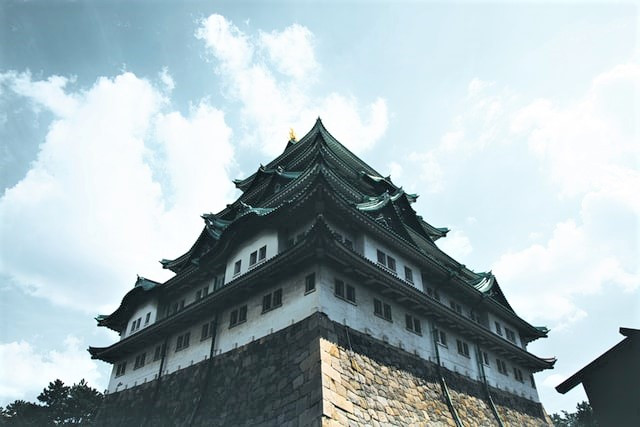 After its destruction during the second World War, Nagoya Castle was rebuilt in 1959 with the help of contributions from its citizens. After all, the caste with its long history in the city had become beloved to its people. Thanks to the availability of historical records including those of the castle’s architectural structure, the original exterior was able to be reproduced with the added bonus of steel reinforced concrete to make it sturdier. The interior however was to become a showcase museum that preserves the history of the castle.

Even so, half a century has passed since the reconstruction and the castle’s low earthquake resistance has become an issue. The castle’s tower keep has been closed since 2018 and expected to be demolished in 2023 with construction scheduled to be completed by 2028. For now, the interior can only be seen by Google Street View on the official website.

Nagoya Castle’s architecture was hailed as a masterpiece of its time. Aside from the main keep, the Honmaru Palace is the second most popular of the castle’s grounds. From its interior, it is easily deduced that the Honmaru Palace was reserved for very important persons; its rooms are richly decorated with intricate decoration patterns and fittings, silk paintings, gold leaf sliding doors and screens, and more. Honmaru Palace’s extravagant design was officially recognized by it being the first palace construction to become a National Treasure in the 1930s. This was well before its destruction and subsequent reconstruction. No effort was spared to authentically reproduce its refined built and prominent artwork with the best of skilled craftsmen called upon to accomplish this task, such as the leading artists of the famed Kano School of traditional painters. 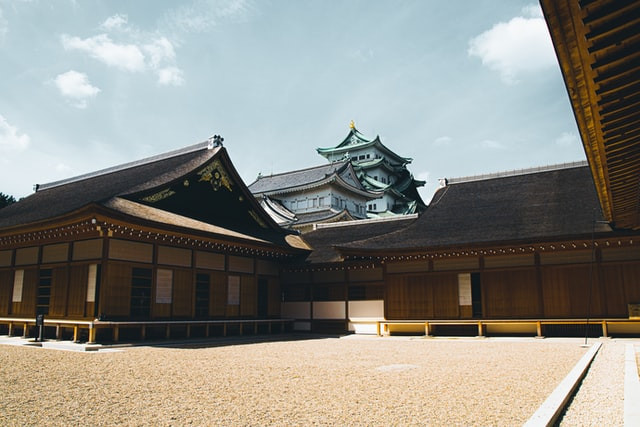 The castle grounds are extensive and can be divided into four parts: 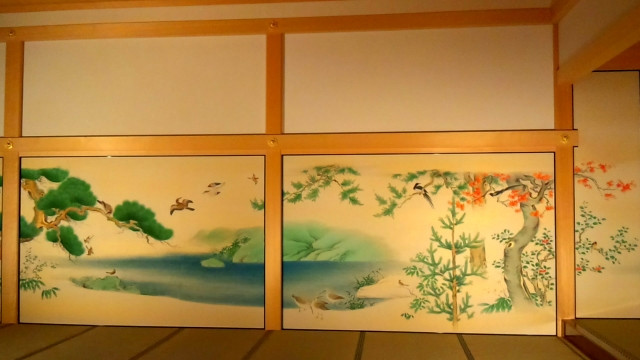 Designated as a National Treasure in Japan, the Honmaru Palace’s original construction was completed in 1615. During this time, it was used as the primary residence of feudal lords as can be seen by its glamorous interior. When visiting the Honmaru Palace, remember to abide by the strict rules set in place to preserve the architecture and beautiful artwork. Take off your shoes, do not use flash photography, do not touch anything, are just some of the many rules.

The tower keep’s ongoing reconstruction is expected to be completed in 2028. 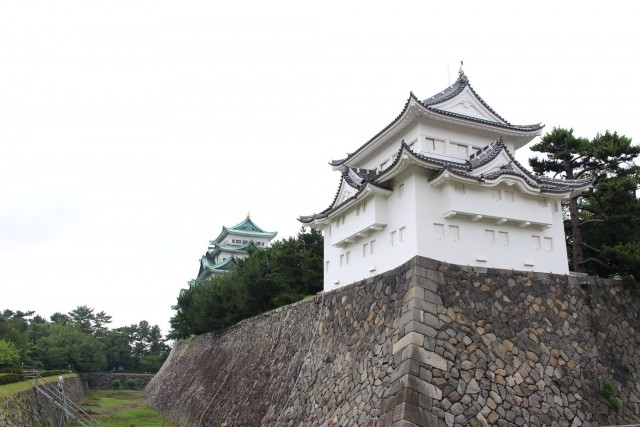 There are three watchtowers on the castle grounds; two are located within the Honmaru area, and one at the Ofuke-maru Area. All three are designated as important cultural properties. It’s pretty interesting to see with your own eyes how military defences were back in the old days. The part of the watch tower that juts out above the stone walls is called Ishi-otoshi, which literally translates to “drop stone”. It is speculated that these are an attack mechanism to drop stones on the enemies. The watch towers also function as weapon storage and guard houses for soldiers on watch duty.

The Ninomaru Garden is one of Japan’s largest gardens that was previously enjoyed by the feudal lords who resided in Nagoya Castle. It is especially beautiful during fall when it is decorated by autumn foliage. If you prefer flowers, azaleas bloom around the gardens in spring, irises in summer, and camellias in winter. With lush greenery, colourful blossoms, a tranquil pond, and the occasional visit from birds and wildlife, it is no wonder the lords loved to visit this garden. 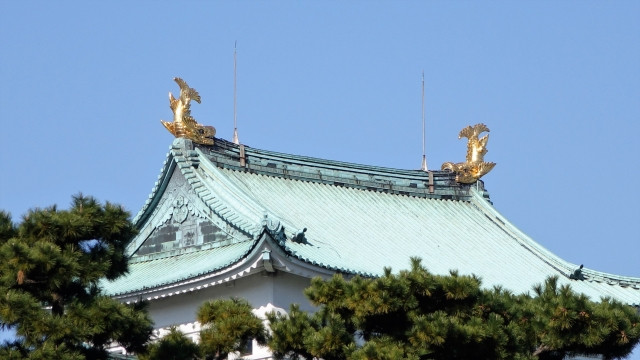 The shachihoko (鯱鉾) or kinshachi (金鯱) is a mythical Japanese folklore creature with a the head of a tiger and the body of a carp fish. It is called golden tiger-headed carp, golden tiger-fish, or some variation in English. Shachihoko statues are usually placed on temple roofs as they are said to bring rain. Remember that during olden times, most buildings in Japan were made from wood and thus prone to catching on fire. The placement of shachihoko is a fire protection ward of sorts.

There are occasions where the shachihoko are removed from their usual perch. The reasons may be for an event, maintenance, or just to let tourists have a closer look.

In the Honmaru area stands a camellia tree, called Palace Camellia (御殿椿 Go-ten Tsubaki), that has bore witness to the history of Nagoya Castle. Every spring, from March to April, beautiful white flowers bloom. It is said that this tree was killed during the war but against all odds has managed to regrow using grafting. 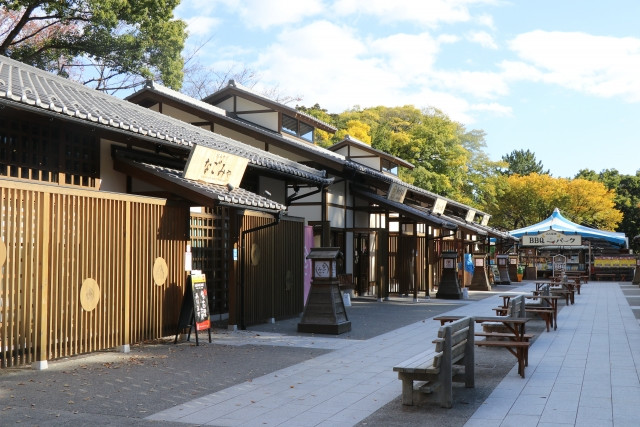 Surprisingly, you can buy food and drinks on the castle grounds (but can’t be eaten inside of course). It’s a good way to re-energize after a walk around the place. Try the soft serve ice cream and Japanese street snacks, or have a proper meal at Kishimen, the only restaurant there serving sushi, noodles, and set meals. There’s also a teahouse where you can have matcha served with wagashi (Japanese traditional sweets). 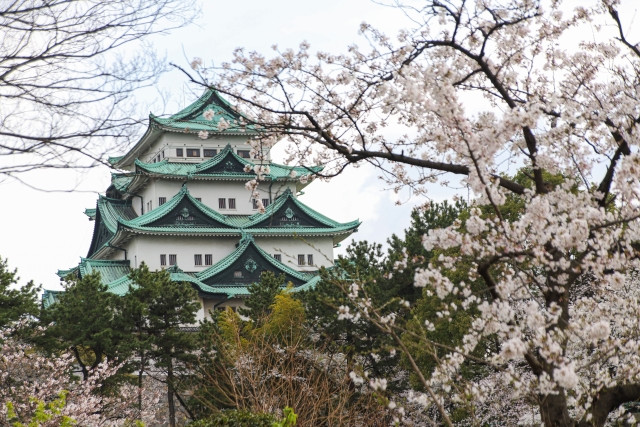 Although Nagoya Castle is fun to visit all year round, you may want to boost your experience by visiting during an event like the Nagoya Castle Spring Festival (March end till early April) to enjoy hanami (cherry blossom viewing), Nagoya Castle Summer Festival (August) to watch the Obon dance, arquebus shooting demonstration & enjoy original dishes at a special set up shachi canteen, Nagoya Castle Tsubaki Exhibition (March) to admire camellia blossoms, and more.

Nagoya Castle is easily accessible by public transportation; bus, train, and subway. You can also drive but parking charges will apply at 180 yen every 30 minutes for a standard sedan.

The nearest station is Higashi-ote on the Meitetsu Seto Line.

The nearest station is Sengencho on the Tsurumai Line, or Shiyakusho (City Hall) on the Meijo Line.

If you are departing from Nagoya Station, you will need to transfer at least once.

The fastest route is:

The cheapest route is: 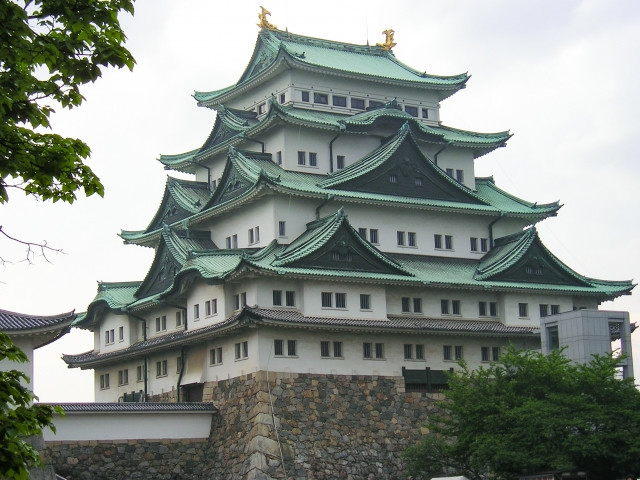 Nagoya Castle is a magnificent sight, with its rich history and culture, not to mention marvelous architecture and art, it is a must-visit when stopping by Nagoya. Don’t forget to partake in Nagoya’s specialty dishes when you are there as well; miso katsu (miso pork cutlets), hitsumabushi (unagi; grilled eel), tebasaki (chicken wings), and more. With all this information, you are more than ready to book a trip to Nagoya, Japan and witness its magnificence. 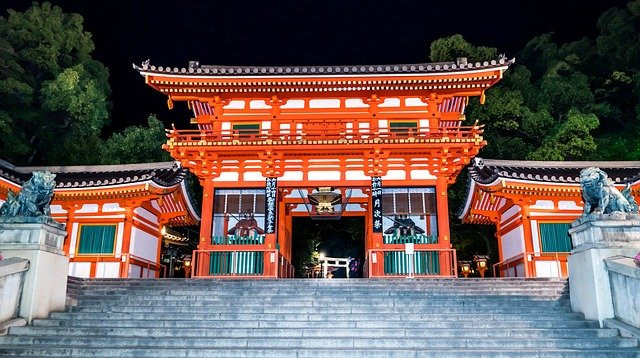 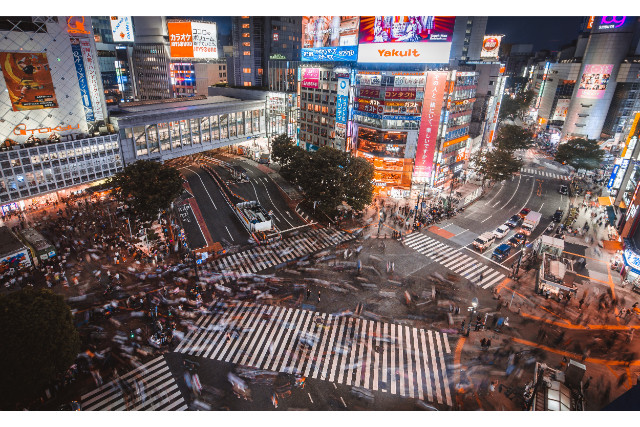 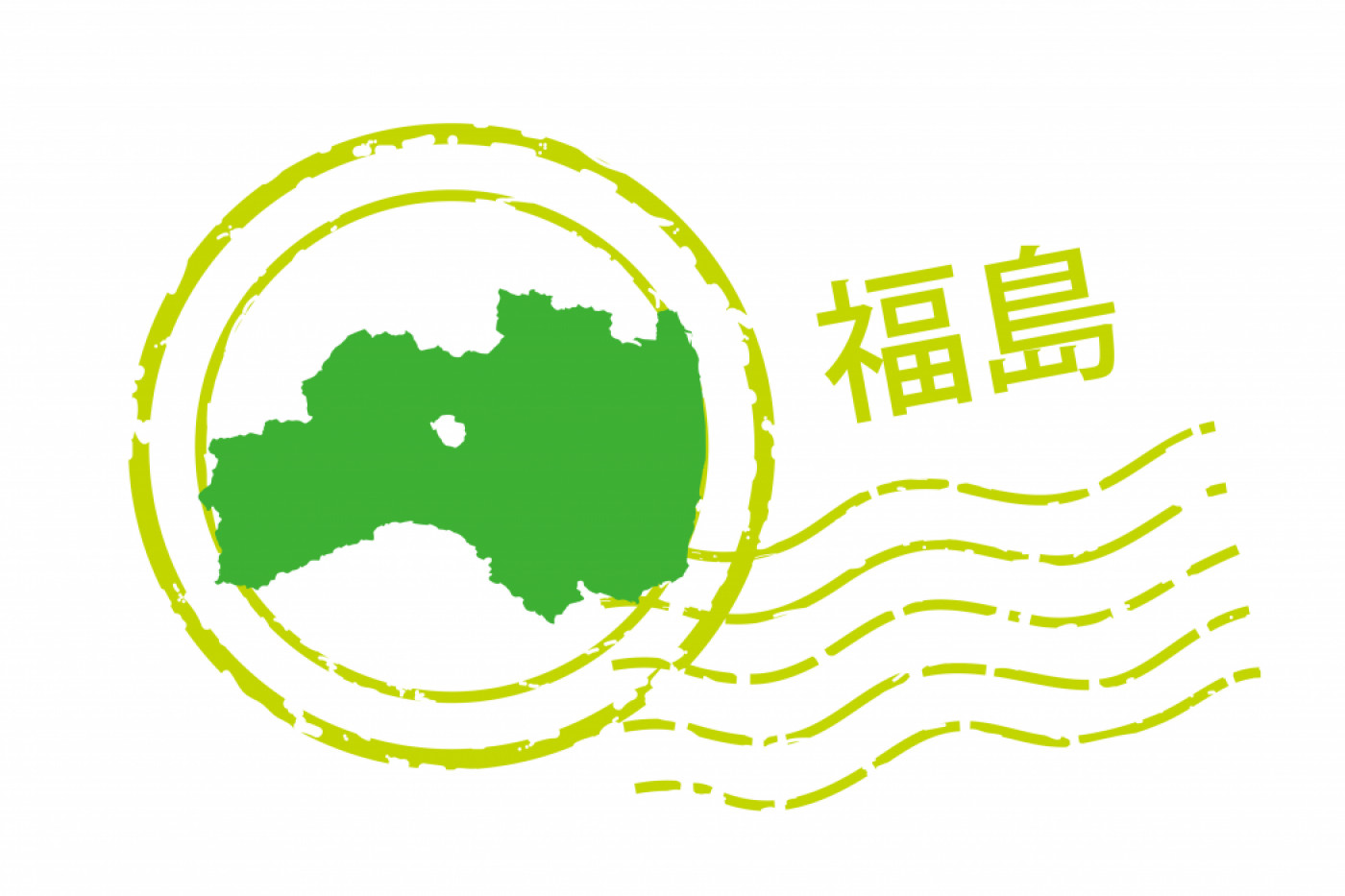 Fukushima is a beautiful prefecture with numerous panoramic sceneries, from tranquil blue lakes, volcanoes, historic samurai cities to exuberant greenery. Go on the unique tour of the aftermath of Fuk... 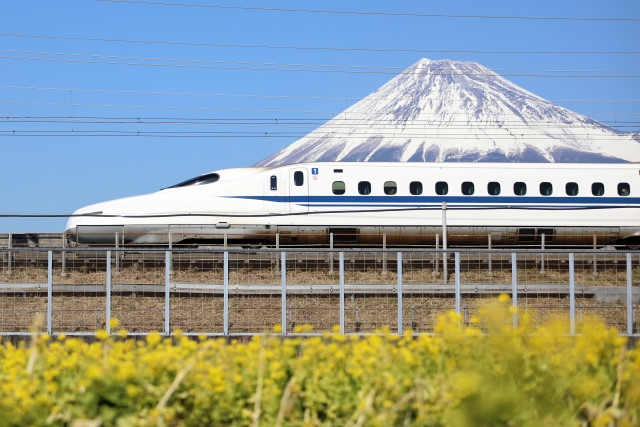 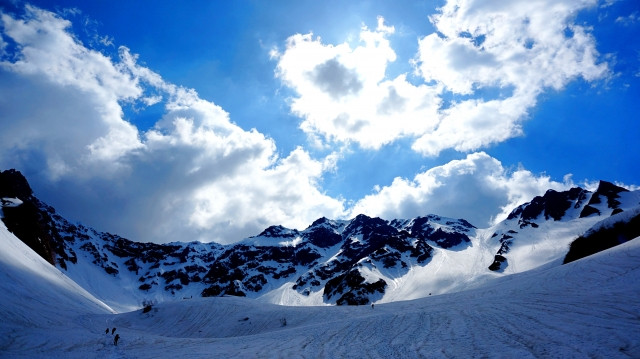 While Nagano might not top people’s lists of must-visit places in Japan, it has many great spots. Nagano City is quite famous for hosting the 1998 Winter Olympic Games and the prefecture overall...