In Japan, people often apologize for many things. It doesn’t mean we are always personally in the wrong but rather, it shows awareness in our part in an interaction. Whether you are apologizing for your own mistake or for a general situation, make sure you’re using the right phrase for each situation.

Why Apologize? It’s a cultural thing

For some cultures, it may seem strange to say words of apology when there was no wrongdoing. Some may even feel that apologizing is admitting fault in a situation. However, in Japan, that is not always the case. In a culture where causing inconvenience for others is avoided at all costs, it’s important to recognize the moments that we do. So even when it seems like the most harmless interaction, someone is usually saying words of apology. It is often said before thank you when someone does something kind. However, it is key to recognize that without these words, a person may come across as rude. So how do you avoid that?

When in doubt in an everyday situation: すみません (sumimasen) 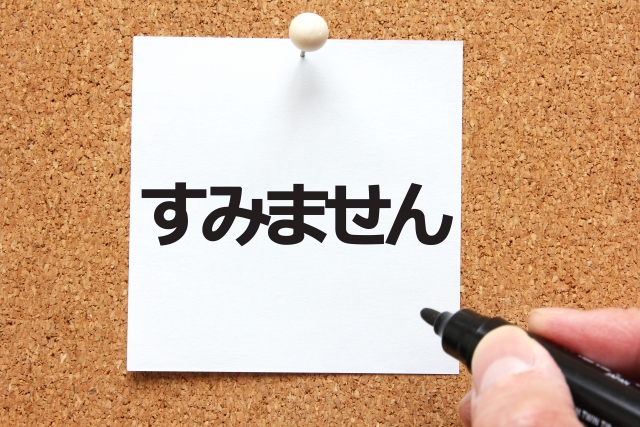 すみません (sumimasen), which means “I’m sorry” and “Excuse me” and at times “thank you”, is commonly used in everyday life. If you say すみませんでした (sumimasen deshita), the apology is in past tense. People often use this when stating for when and what you are apologizing for. Many people say すいません (suimasen) to make it easier to say. While not incorrect, this is seen as slightly more casual. In a more formal setting, please use すみません (sumimasen).

It can be used when you bump into someone:

or when you want to get off a crowded train at your stop and have to push past people:

You can also use it when refusing a request:

すみません、ちょっと急いでいるので。- Sumimasen, chotto isoideirunode.（I’m sorry, I’m in a bit of a hurry)

The tricky use of すみません comes when it’s used to mean “thank you” more than “I’m sorry.” Or rather, you are sorry for causing an inconvenience to the other person and are thanking them for what they have done.

For example, when you drop something and someone picks it up for you:

or when someone does something nice for you, you would say:

This means “I’m sorry for making you go through that trouble (of doing that nice thing, such as getting you a souvenir). Thank you so much.”

Even when people ask the staff to put their purchases in separate bags at the convenience stores, a service they happily provide, you might hear the customer say “Sumimasen”. Or if you give up your seat to an elderly person, they will say “Sumimasen”. Of course, no one is in the wrong in these situations, and yet without saying “sumimasen”, it comes off as rude or like you are expecting people to do these things for you.

[Please note that with close friends, you wouldn’t use these phrases. Such phrases will be mentioned below.]

As a side note, you can use すいません (suimasen) to get the attention of a shop clerk if you have a question or restaurant staff when you want to order. In this case, it means “excuse me” and not “I’m sorry”. 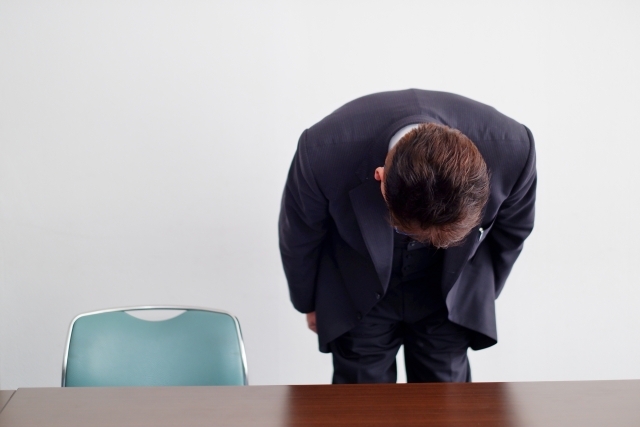 We often use すみません among colleagues at work, but when making a formal business apology, it is not adequate to convey your regret.

Even if what you did is not quite that serious, it’s important to say. It carries the nuance of “My apologies” or “my mistake”. You can use this when you say something wrong and need to correct yourself or if you enter the wrong room or call the wrong number.

If you need it to be more formal, you can say 大変失礼いたしました (taihen shitsurei itashimashita).

Note: 失礼します (shitsureishimasu) is also a commonly used phrase; however, it means “excuse me” and not “I’m sorry”. You would say it before entering a room where someone is expecting you, or when you end a phone call or leave work before your colleagues.

For most formal apologies, 申し訳ございません

申し訳ございません (moushiwake gozaimasen) literally means “I have no excuses to offer for what I did.” We use it to mean “I’m sorry”. For immediate situations, use 申し訳ありません (moushiwake arimasen), such as the first thing you say when you see your boss when you are late.

For example, if a store has run out of a product, the store staff will say “申し訳ございません”。If you send your client the wrong information, you would say “申し訳ございませんでした。” Surprisingly, even if a train is delayed by a minute in Japan, you will hear “申し訳ございません” in the train announcement because they are apologizing for causing any inconvenience, however minor.

申し訳ございません is also used before a request. Similar to the usage of “Please” when you make a request, it is used as a “cushion” phrase before asking someone to do something. However, without this “cushion”, the request sounds abrupt and rude so it is very important to use.

In the case of a big mistake, use お詫び申し上げます

This is used in situations when the relationship between two companies or the reputation of a company can be affected by the actions of a person or company.

You may hear it when a company or public figure has a press conference to apologize for a wrongdoing or scandal.

You may also hear this on the train or in an airport if the vehicle has been stopped or severely delayed due to an accident or bad weather.

It is used in business paired with 申し訳ございません (moushiwake gozaimasen) to apologize for any mistakes that affect clients. For example, sending the wrong file or mistaking the number of orders. 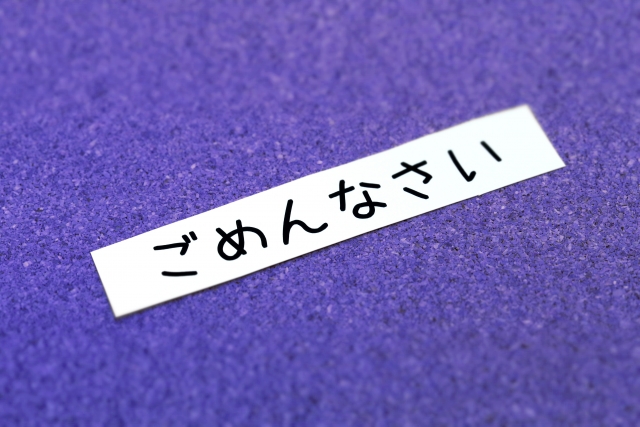 The very first form of “Sorry” that children learn is ごめんなさい (gomennasai). The roots of the words mean you are admitting that you are wrong and asking for forgiveness from the other party.

This apology is only used among family and friends.

You can say the shortened form ごめん (gomen) to friends and family or ごめんね (gomennne). By adding “ne”, it shows a level of closeness in the relationship.

This can be used when you did something wrong, or if they did something nice where they went out of their way to do something for you, such as pick up something you dropped. In the case of the latter, you can pair it with ありがとう (arigatou), thank you.

Adding 本当に (hontou ni - really) before ごめんなさい or ごめん is a way to make the apology more serious.

For friends, some might say マジでごめん (maji de gomen). Maji means “really” so this would mean “Really sorry”. Maji de is slang, so it is only used among close friends.

Another word we use to apologize is 悪い (warui) which means bad or wrong. When used in or as an apology, it means “I am in the wrong.” 悪かった (warukatta) is “I was in the wrong” and わりぃ (warii) is a very casual form of 悪い, mostly only used by men, the equivalent being “My bad”.

Body language is key for apologies 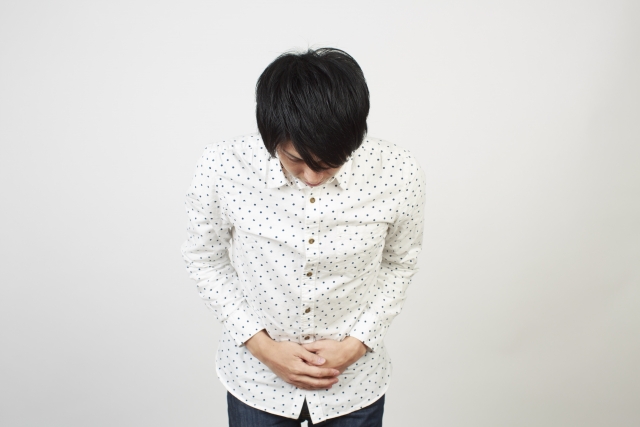 Of course body language is important in any language.

However, Japan has some very specific types of body language to accompany apologies. It is so ingrained in people’s systems to have an accompanying movement with an apology that you might see people bowing even when they are apologizing on the phone.

In a short passing apology, such as when bumping shoulders or when someone does something nice in passing, a short deep nod is appropriate.

However, when you are apologizing when you are deeply in the wrong, bowing at an angle from the waist is important. The bigger the mistake, the deeper (and often longer) the bow. When the bow is at a 30 degree angle, people will hold place one hand over the other in front of them and bow. When the bow is deeper, women will often place their hands on their thighs and bow whereas men will keep their hands straight at their sides.

If you are sitting, putting your hands flat on the table in front of you and bowing while bending your elbows is appropriate.

In very serious situations when you have done or caused something with severe consequences, some people get on their hands and knees and bow with their head to the ground. This is called dogeza. But for most people, they will never have to do this in their life.

For friends, for minor offences, holding your palms flat against each other (as if praying) close to your face or sometimes accompanied by a bow is an adequate show of how sorry you are, such as when you’re late. 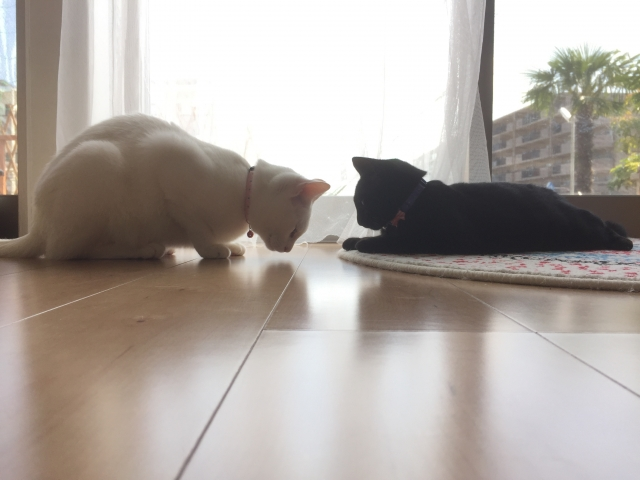 Make sure you know which level of apology is appropriate as well as expected of you.

Sometimes it seems difficult to foreigners because you are expected to apologize even when you are not technically sorry or in the wrong. However, it shows that you understand your position in the situation, as well as that it's a set type of interaction.

こんなに長くなってすみません。ありがとうございました!
Konna ni nagaku natte sumimasen deshita。Arigatou gozaimashita!
I'm sorry that this was so long. Thank you for reading! 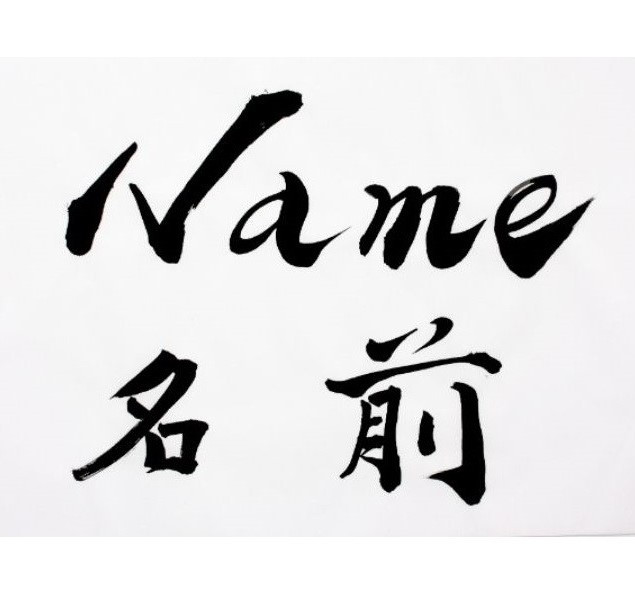 Understanding Japanese Names and How to Use Them

Due to the language, Japanese names are carefully composed of characters that provide meaning for the name. There are also some rules to be followed when addressing someone. Learn the basics of the st...